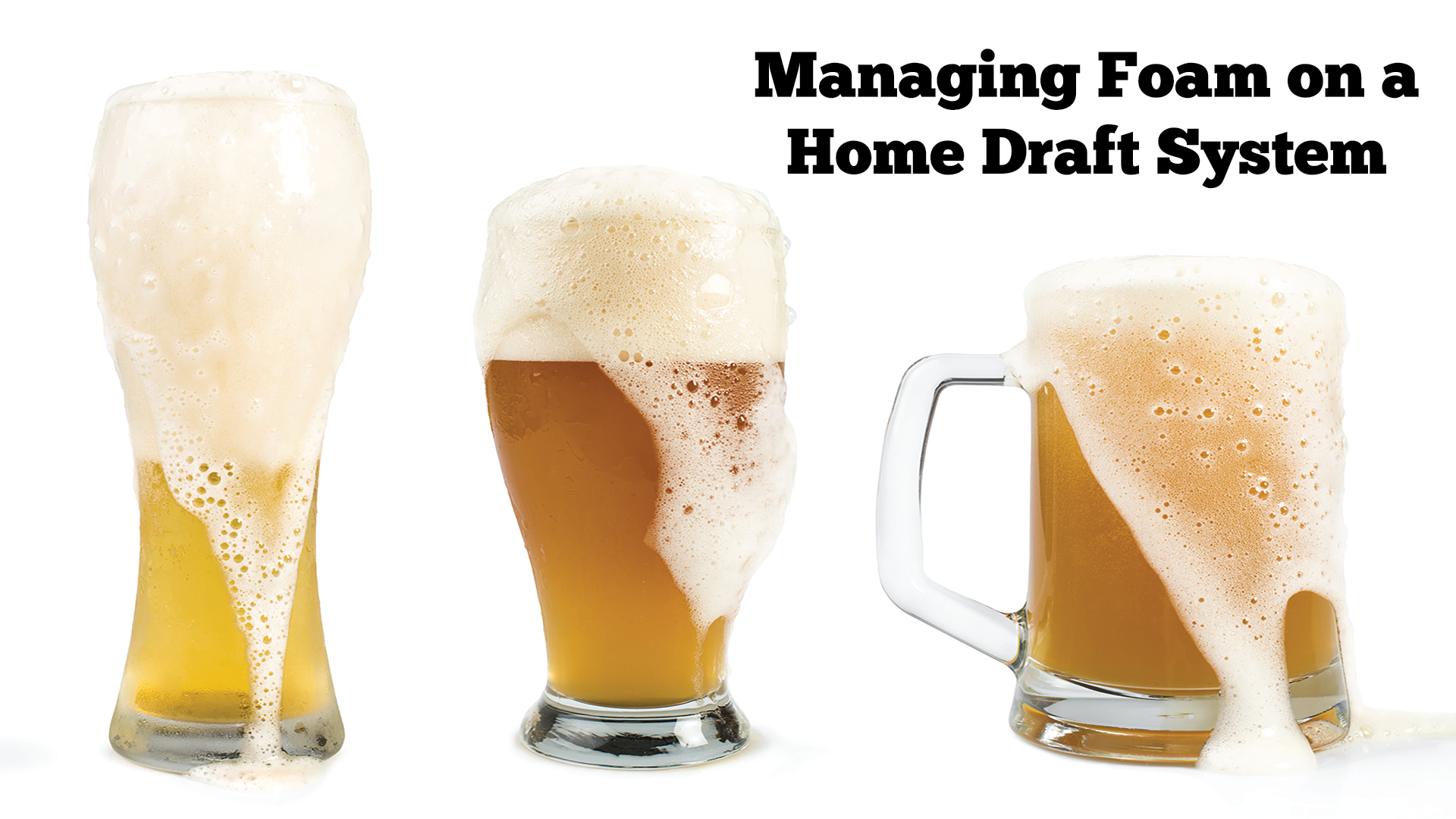 One of the questions that I get the most (being in the draft beer industry) is how to control foam. Ninety nine percent of the time, when someone is having an issue with excessive foam it is due to one or more of the three causes of foam: temperature, restriction, and carbonation levels. I will cover the three causes and their cures and then discuss the more obscure causes of foam.

Temperature is the number one cause of foam for home draft system users. The temperature of your beer should be between 36 and 38 degrees. If your beer is warmer than this you are going to get foam, unless you use additional restriction or have your beer carbonated to a lower level. It is often discussed that British beers are served at a warmer temperature. It is no accident that they are also carbonate their beer at a lower level too. There is a direct correlation!

Draft beer needs restriction in order to pour properly. Restriction can be obtained by two main methods. One is the inside diameter and length of the beer hose. The longer the hose and the smaller the inside diameter means the slower the beer travels. The slower the beer travels then the less it will foam. A good analogy of this would be to take a crowded 6 lane highway and choke it down to 1 lane. Those six lanes of cars that were traveling at 75 miles an hour are now going be going a lot slower.

The other way to control restriction is to use an inline flow control or a flow control faucet on your draft system. These give you a lot more flexibility as they can change with conditions. For example, if someone opens your kegerator too many times and your beer warms up a few degrees you can adjust the restriction on the fly and reduce foaming. If you have a higher carbonated beer (maybe you over carbonated your homebrew), you can compensate for this as well when using an inline flow control or flow control faucet. Different beers use different carbonation levels. An English beer might be carbonated to 8 PSI, a Belgium to 16 PSI. Trust me when I say that you DO NOT want to have to change your hose length in your kegerator. Even systems using a party faucet can have restriction by using products like the CMB Event Faucet.

Improper restriction can cause excessive foam or even not enough foam to create a proper head. Make sure your system is properly tuned to give you just the right amount of head on your beer!

Carbonation is our friend! Without it, we are left with flat beer. You can largely control carbonation foaming using restriction and temperature. As I mentioned earlier, it is possible to have a very high carbonation lever and virtually no foam. This will give you a beer that has retained all its carbonation, which will be released into your stomach and released in two ways; neither of which will be appealing to those around you.

Carbonation level is largely determined by the style of beer. Regardless of the style, you still want a uniform head when you pour. If your beer is over-carbonated, you can serve it at a lower PSI for a while and it will lose carbonation as you serve. You can also reduce carbonation by purging some of it via the manual pressure relief valve on a homebrew keg or the manual valve on commercial couplers. Be careful not to over compensate!

Combination of factors and Troubleshooting

Excessive foam is often the result of more than one factor. You might have your beer a little over carbonated, a few degrees too warm, and not have quite enough restriction. You must be methodical in troubleshooting. Always start with temperature. The biggest mistake people make in troubleshooting foaming issues it to assume their temperature is OK. If you don’t have a thermometer in your glass of beer, then you have not ruled out temperature as an issue! Next, look at restriction. If you are using a direct draw system (99.9% of home users are), then you need at least 5’ of 3/16” beer line or flow control. Next, make sure your beer is not drastically over carbonated.

Other issues are not very common but can occasionally raise their big ugly foamy head. Be careful not to jump to these too fast. They are rare and usually when someone thinks it is one of these causes, it is actually one of the main three.

I am probably missing some “other issues” and I will continue to update this section as they come up in my trouble shooting. If you discover any “other issues”, I would love to hear about it and put it in this article.

Remember - when you have a gas leak, look at the three main issues first: temperature, restriction, and carbonation level. Then, explore the more obscure causes. If you still can’t figure it out, I invite you to email me and reference this article. My email is tburns@kegconnection.com. Thank you and happy homebrewing!